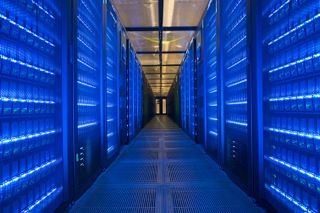 STFC and NERC today (2 June 2014) celebrate the completion of a major upgrade to the JASMIN data analysis infrastructure that plays a key role in the assessment and evaluation of huge sets of environmental data produced by the UK scientific community.

JASMIN has been designed for the Big Data challenges posed by 21st century environmental science and will expand its role as the infrastructure in which a plethora of science community services are run. The current upgrade will ensure a better understanding of, and a quicker response to, environmental change.

Run by STFC on behalf of NERC, JASMIN is based at STFC's Rutherford Appleton Laboratory. It is half super-computer and half data-centre and as such provides a globally unique computational environment. It is responsible for two main functions: infrastructure for the data storage and services of the Centre for Environmental Data Archival (CEDA), including the British Atmospheric Data Centre; and providing a platform for data-intensive scientific computation for the environmental science community.

Environmental science is benefiting from an exponential increase in data from new observing platforms – from sensor webs to Earth observation satellites. At the same time, increased computer power coupled with sophisticated mathematics, is opening up more environmental science to accurate simulation, which also generates vast quantities of data.

Many datasets, particularly model data, are too big to be easily shipped around. JASMIN enables scientists to bring their processing to the data.

"STFC is pleased to exploit our expertise in data management and scientific computing to support NERC by delivering this key national facility, which we expect to underpin analysis of large environmental datasets for many years to come."

"NERC welcomes this major upgrade to this world-class facility. JASMIN is a unique hybrid of petascale storage, high-performance computing and networking, coupled with cloud hosting capabilities, and will make a significant contribution to one of NERC's most strategically important challenges: the improvement of predictive environmental science."

"With this upgrade, JASMIN will provide the entire NERC community with a key platform to exploit the heterogeneous and high volume data typical of modern environmental science."

"With JASMIN, the UK will be well placed to exploit the wealth of earth observation data coming from the European Space Agency and elsewhere over the next decade."