Using JASMIN for the largest ever UK wildlife assessment

Most of the UK’s wildlife is in decline, according to the 2019 State of Nature (SoN) report. However getting to this statement was not an easy process. Imagine trying to measure trends across thousands of different species and millions of datapoints, with biases in the data thrown in for added complexity… but that’s exactly what scientists have now done. The most comprehensive SoN report has now been completed with the help of JASMIN - our globally unique petascale analysis facility for data-intensive environmental science. Researchers relying on JASMIN for their data analysis contributed information to the SoN report, including several wildlife groups that had previously been impossible to analyse.

Researchers from the Centre for Ecology and Hydrology (CEH) used JASMIN’s large scale processing capability to contribute to  the groundbreaking wildlife assessment. “I use observation data for our work, which is when volunteers go out and record what wildlife they’ve seen and where. This can be used to get a picture of how biodiversity has changed, in this case, from 1970 to 2015” explained Dr Charlie Outhwaite, a Research Associate at University College London and CEH. Unfortunately, as these data are collected in an unstandardised way it can lead to biases in the datasets.  Therefore, to analyse these data, complex models must be used - which is where JASMIN steps in.

To account for some of these biases the researcher used occupancy models - these are hierarchical models that allow the separation of the data collection process and the ecological processes enabling the accounting of certain data biases. “When there are a lot of data, these models take a long time to run. We wanted to analyse 12,000 species using over 34,000,000 records - so using a home computer, or even CEH’s small computing cluster, was simply not feasible for all datasets” explains Dr Outhwaite. Even with JASMIN’s fast parallel processing it still took months to complete some of the model runs, but without JASMIN, the scale of this research would not have been possible at all.

At a national scale, the trends of less well-studied taxonomic groups (such as ants, mayflies  and spiders) over time was not previously known. This was due to the limited availability of records and subsequent biases in the data. The use of occupancy modelling has now allowed us to explore these groups. Groups, including bryophytes, lichens and moths, had not been included in the State of Nature reports previously due to the challenge of analysing the huge datasets. JASMIN’s processing power means it is now possible to analyse these groups and for this research to contribute to a clearer and more detailed picture of change in less well-studied wildlife groups.

However, there are still gaps in the available data for many of the UK’s less common species, even in well surveyed groups such as birds. One example is the Pied Flycatcher which is threatened in the UK (see image). Additional research is now being undertaken on JASMIN to more precisely estimate trends for less common bird species. Dr Philipp Boersch-Supan, an Ecological Statistician at the British Trust for Ornithology, explains “This research heavily relies on the computing and storage capabilities of JASMIN - which enable us to do new types of analyses that had previously been impossible to conduct on our in-house hardware. We also relied on the ability to easily access climate data from the CEDA Archive to feed into our analyses”. 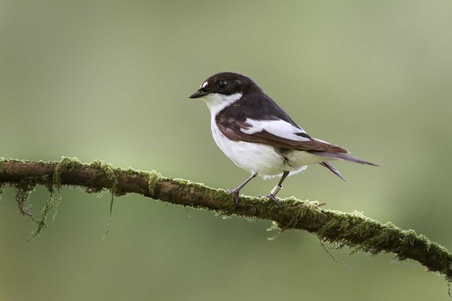 JASMIN enabled research that contributed to the largest study of UK wildlife to date and continues to be essential for future research. Studying wildlife trends can help us to gain a better understanding of how and why species populations change by considering man-made and environmental drivers. As well as the State of Nature report, this research also contributes to the annual UK Biodiversity Indicators report, which is an obligation for the UK government to monitor progress towards biodiversity targets (like the Aichi targets). This work helps guide government policy on environmental issues such as pollinator declines and impacts of climate change on wildlife. Without JASMIN, it is unlikely that so many species could have been analysed.

The outputs of the occupancy models produced by this research can be downloaded from the NERC Environmental Information Data Centre here. Research papers are currently in preparation, and will be added into this article when available.

JASMIN is managed jointly by STFC's Scientific Computing Department and CEDA (Centre for Environmental Data Analysis), part of RAL Space. It is funded by the Natural Environment Research Council (NERC).