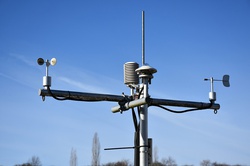 One of the most widely used climate datasets has released its biggest update since 2013. Since the initial launch back in 2000, the CRU TS (Climatic Research Unit gridded Time Series) dataset has been used in thousands of studies worldwide to support research about our changing climate.

This dataset is made up of monthly weather measurements going back to 1901. The measurements include temperature, rainfall, humidity, cloud cover and six other climate variables. The observations are supplied from an extensive network of weather stations across Asia, Africa, Europe, North America and South America.

CRU TS provides atmospheric scientists with a high-resolution grid of information that can be fed into computer analyses of climate change and climate variability. In addition to climate research, this dataset is often used within the hydrology, civil engineering, financial and insurance sectors.

Version 4 of CRU TS, the latest update, gives users access to a bigger set of information about the climate, and related to that, more confidence in diagnosing geographical variation in the climate over the last 120 years. Over the past year, ~2480 users have accessed CRU datasets (all versions) held in our Archive. The new CRU TS (v4.03) is already extremely popular with ~1400 users accessing it since it was released in January. This makes it the top atmospheric dataset that we hold!

Ian Harris, an NCAS researcher in the Climatic Research Unit at the University of East Anglia, tells us about the recent update: “For many CRU TS variables, there simply aren’t any equivalent datasets. This version’s improved interpolation, the way that we estimate values between known data points, gives us a better way to validate and trace the information. Funding from the National Centre for Atmospheric Science helps us to publish the source observations, improve the dataset and keep it up to date, which is really important because we know that CRU TS enables a lot of climate research.”

All CRU data can be found in the CEDA Archive here.