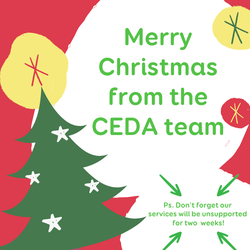 In line with the Christmas shutdown of CEDA's host institute, STFC, the CEDA and JASMIN teams will be unavailable from 15:00 on Tuesday 24th December 2019 to 09:00 on Thursday 2nd January 2020. However, there will also be minimal helpdesk support before and after this period (from Friday 20th December until Monday 6th January) due to extremely limited staff availability.

CEDA websites, archives and services, including access to JASMIN, should be available during this period but will operate unsupported. Therefore should any problems occur to our services, it is unlikely that these would be fixed until staff return in the New Year.

JASMIN itself will be operating with no operational support from Friday 20th December until 09:00 Monday 6th January during which systems should be considered "at risk". Only emergency cover (for severe issues such as fire or power outage) remains in place during this period, and although we anticipate that the JASMIN service will remain operational throughout, it is possible that some issues may not receive attention until staff return in the New Year.  A “change freeze” is also in place as of 17:00 on 18th December, so requests for new or changes to existing services may not be dealt with until the New Year.

All user queries received during this period will be answered as soon as possible from Monday 6th January 2020.

The CEDA and JASMIN teams would like to take this opportunity to wish all our users a very Merry Christmas and a Happy New Year.